Interview with the Swiss publicist, designer, and architect Werner Blaser about his mentor Mies van der Rohe, who taught him elementary seeing and designing in the US.

CUBE: Mr. Blaser, you went to Chicago in 1951 as a 26-year old to study at the Illinois Institute of Technology. How did you meet Mies van der Rohe there?

Blaser: I was at the Institute of Design, at which the artist László Moholy-Nagy taught, to participate in photography seminars. But I wasn't quite happy there. And so I simply started going to the architecture department more, at which Mies taught at the time. That is where I met after not very long. He invited me to his home together with his students – Mies loved open conversations. But I only really got to know him later, when I sent him a copy of my exhibition book about the architecture of Japanese tea pavilions. Mies thanked me a lot and ended up buying 50 copies as presents for his friends and acquaintances. In this letter he also asked me to come to Chicago to do a book together with him about him and his architecture. In 1963/64 I visited him for three months each to prepare the well-known monograph "The Art of Structure" – this gave me the opportunity to get to know him very well a few years before his passing.

CUBE: Mies had emigrated to the US at the end of 1938 – 13 years later, did you find him to be more American or German?

Blaser: Neither – he was just simply Mies! (laughs) Actually, he did remain very German. He spoke very refined German. He was not sentimental but you could feel how close he still felt to Germany. I had an idea at the time: Mies in America – that is "Chicago High". By this I meant the steel I-beam which he used in all of his buildings. Working with them was a highlight of his life! And this was only possible in the US at the time! With this "High" he once again exceeded everything he had already accomplished in Germany. He would have remained a famous architect in Germany, but the Chicago I-beam detail really made him world-famous.

CUBE: You already mentioned the book "Temple and Teahouse" about Japanese architecture. At the time, you travelled directly from Chicago to Japan and spent half a year in Kyoto studying these traditional buildings. How did this come about?

Blaser: That was an incredible story! I came to Chicago just as Mies had just completed the Farnsworth House and the apartment towers on Lake Shore Drive. I had the opportunity to visit this weekend house. The first picture I took with my own camera still showed the completely open veranda of the Farnsworth! And that was a crazy experience: I was in this room looking outside into nature, right at the Fox river – and I captured this view with my camera. Unfortunately this is no longer possible because the veranda was completely closed during the first renovation due to the many river mosquitoes. In my photography class I placed the print of the Farnsworth picture in the fixing bath in the dark room and then hung it up outside to wait for it to develop. An architecture professor was walking by and asked me: "Is that Japan?" And I thought: "Goodness, he should really be able to recognize Mies' architecture!"

CUBE: What kind of feeling was that when you, prepared by Mies, drew and photographed these buildings in the Japanese tradition?

Blaser: After meeting Mies I was of course completely in love with the construction! In Japan, I was especially interested in residential buildings, not as much the temple complexes which are more defined by China. The incredibly sensitive production of Japanese detail – that is what interested me! And you have to consider: In 1953 there were maybe ten foreigners in Kyoto – I was completely by myself in the stone garden of Ryoan-Ji and the priest there even invited me to tea! When I returned ten years later, about ten buses stood in front of this temple. So I had come just in time – that was a real gift! I always focused on simplicity, like the Katsura villa in Kyoto, a pavilion building from the 17th century. At that time you could still go in and out and take pictures – today that is unfortunately no longer the case.

CUBE: What happened to Mies' architecture – did his approach kick off a school?

Blaser: The people around Mies – that was really the elite! Say Myron Goldsmith, who drew up the Farnsworth House with Mies. Or my friend Helmut Jahn (who started with Gene Summers, who had continued Mies' firm) who further developed his vision together with Werner Sobek, in particular in terms of building details. If he had lived and worked a bit longer, Mies would have probably done it the same way. Still: The majority of Mies' students turned post-modern after his death. Only I stayed the way I was with Mies. I never changed!

CUBE: Over the course of your life, you authored some 112 books about architects and architecture and you are still at it. How come that such different personalities as Mies, Alvar Aalto, Helmut Jahn, or Tadao Ando gave you their trust?

Blaser: For me it was never about copying Mies' architecture in any way. It was important to me to show the thought behind the visible construction, which I also found in Japan and many others. I was interested in the attitude. I did not go looking for all architects who liked to draw straight lines! I was looking for the attitude, their approach to architecture, and how they lived in the world! For this reason I also carry completely different world in me. I also have two names, after all: In America they call me "Wörner Bläsör"! (laughs)

CUBE: Do you collect these different worlds into your "Living Archive" which you are currently preparing in your son's office ?

Blaser: I have been working on the "Living Archive" for years to give the next generation a reference point. I am putting everything I have collected throughout my life into this archive. I have photographed all of Mies' Chicago buildings – as well as Japan's temples. Everything connected to the term "attitude" will go into the "Living Archive"! It is not important whether the archive will be called "Werner Blaser Archive" some day. As long as someone can get some use out of it!

CUBE: Mr. Blaser, thank you for this conversation. 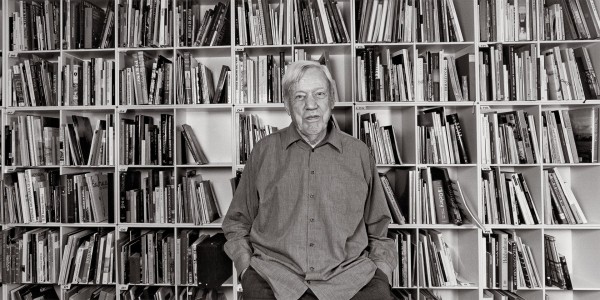 Write a comment
Trusted Shops Reviews Toolkit: 1.1.3
This website uses cookies, which are necessary for the technical operation of the website and are always set. Other cookies, which increase the usability of this website, serve for direct advertising or simplify interaction with other websites and social networks, will only be used with your consent.
Decline Configure
Accept all