The Art of the Fugue in furniture

Designer and publicist Werner Blaser always defined his own mission. His furniture was created as part of a room design. It allowed him to experiment with clever wood composites. He pursued his vision of harmonious design all his life with great passion.

The term "principle of an architecture" in furniture by Werner Blaser in the LÖFFLER Edition is a reference to the design process. This is furniture which Blaser developed in the 60s for a residential complex in the Old Town of Basel and reworked for the re-edition. Four tables, one armchair, one stool, and one chair are now sold as a WB furniture set. They are made from square profiles, 33 x 33 mm, in solid oak. The corner connections in wood with which the architect experimented are striking. These "variations on a theme" are an invention of Werner Blaser, which expresses his veneration for the Japanese woodworking craft. Its basis is an orthogonal order, as it was typical in the 60s. Its corner joints are refined variations on the same basic principle. Slots are sawed into the square profiles in the middle at a 1:3 ratio, into which the protruding crests are inserted. The profiles meet each other offset. This way, the connection becomes an event in these knots. The WB furniture set is made per order in a shop with emphasis on manual craftsmanship and diligence.
The black core leather on seat and backrest is prepared by hand using an old upholstery technique.

Werner Blaser, born 1924 in Basel, became a self-taught generalist. He completed an apprenticeship as carpenter and completed his basic design training with Paul Artaria in a specialized class for interior design. However, once Europe opened up again after the war, his curiosity drew him into the world. In 1950s Scandinavia, he formed his guiding principles and never tired to visit the great architects of the time in person. He worked for Alvar Aalto in Helsinki and became a student of Mies van der Rohe in Chicago. The latter became his great role model and he had a lifelong connection with him.

His world view, which he developed over many journeys, is defined by his vision of harmony He found it in the work of Mies van der Rohe and the Japanese tradition. It forms the basis for his view of the kinship of timeless architecture in East Asia and the classics of the modern period. And he found parallels to traditional wood architecture in Europe. He developed his view independent of time and place, again and again unites seeming opposites, and thus creates unexpected new things.
This comparative view defines his life's work: As a photographer, he captured his discoveries during his trips in incisive B/W pictures on his Rolleiflex. These pictures served a generation of designers to see the beauty of architecture and handicraft culture. As publicist he published more than 100 books which document and connect cultures in the East and West. As exhibition creator he illustrated this topic with artful designs for everyday use in his own collection. As architect and furniture designer, he implemented his vision of houses and objects in the region around Basel.

From the interest of the manufacturer in his furniture, the way to an exchange leads through the comprehensive world view of the architect. He is not only receiving late recognition for his furniture work but also the chance to make his philosophy accessible to a new audience. 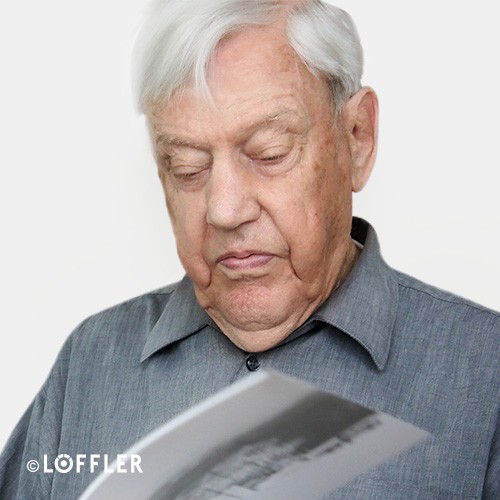