Nominated for the German Design Award 2015 are the NK 1 – in the categories Office and Lifestyle – and the MESAMI 0200 in the category Office.

On occasion of Cologne's ORGATEC 2012, the NK 1 by the Japanese artist Katsuhito Nishikawa was introduced at the trade fair booth of the LÖFFLER GmbH. It was the hand-signed prototype of the now published limited edition series which LÖFFLER produces in three variants as part of its design edition. For the NK 1, the designer reduced the seat nature to a posture device which forces humans to interact with the proffered form. At first glance, the seat does not ingratiate itself with the user but rather lets one suspect a certain disciplined sitting posture which comes from Japanese culture. However, once seated, one feels that the seat and backrest serve as perfect ergonomic surfaces. The leather cover, proposed in three variations by the artist, is stretched over the plywood shapes like a second skin which adapts to the construction and distinguishes itself with its comfort.

The MESAMI 0020 designed by Fritz Močnik captivates with its consistent formal language, balanced proportions, and top quality craftsmanship. It scores as a visitor chair, in conference rooms, in restaurants, or in a stylish home. Breathable, ergonomic, comfortable: The seat shell, upholstered without glue, is good for people and the environment. Unmistakable and expressive due to its leather sling. He already received one of the most desirable design awards in the world last year: the 'red dot'. His especially accomplished detail solutions earned the MESAMI 0020 the "honourable mention". 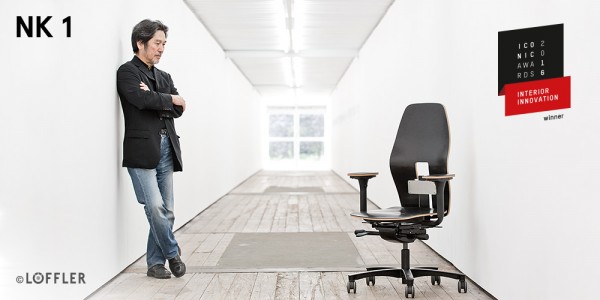