The beginning – or: 30 years and loud as ever

I should probably introduce myself first: My name is Teodora and everything started with me in 1987. It might not be obvious at first glance why I was chosen as first chair in the Werner Löffler Collection. Ingeborg, Werner's mother, also did not find me suitable at the time as I was spinning in front of her on my pedestal. I will admit That my daring exterior is somewhat polarising. A backrest made from Plexiglas?! A seat from laminate?! That's not how ergonomics works! So, as such, it does not look like I would be comfortable to sit on. Maybe I wasn't meant to be sat on?

"Form follows function" does not seem to apply to me. My spiritual father, Ettore Sottsass (1917-2007), created me in 1986/87 more as an epitome of the so-called New Design. In the beginning of the 80s, the Memphis movement which Sottsass belonged to broke with the traditional understanding of furniture, the "good form" 1. The goal was to forego the functionality of utility products as a design principle and instead create furniture which evokes emotion and has a high recognition factor.
As a result, the surface was covered with atypical décor and thus optically upgraded. An example for this is the "Craquelé" by Nathalie du Pasquier which I use. Free interaction of elementary shapes, colours, and materials is supposed to blur the boundary between furniture piece and plastic. And, to be honest: Don't I also have a sculptural character?

30 long years have passed since my move from a furniture house in Franconia to this collection. A lot has happened: Another change of venue and of course, bit by bit new neighbours: some a little younger, some a lot older. In the meantime you can definitely speak of a multi-generational house.
Since I have my place of honour on a pedestal at the entrance to the collection and I thus register every newcomer, this gives me the opportunity to introduce you to my room mates one after the other.

For more stories about my room mates go  here

If you would like to learn more about me and the Memphis movement, I have a few ideas for you:

1The term "good form" was coined in the book by Max Bill issued in 1957 and stands for timeless, functional design.

Curator of the Werner Löffler Collection 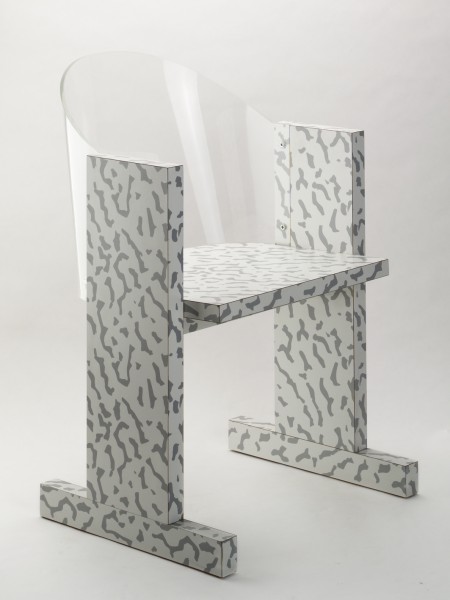