Werner Löffler – The Lord of the Chairs

The Lord of the Chairs

People can answer the question themselves why he is so obsessed specifically with seating furniture , says Werner Löffler. At the breakfast table, in the car, at the desk, at lunch, on the sofa, on steps, on bicycle seats, and on the toilet: Over their life, people sit more than they stand.

The 49-year old sits on a chair from the Löffler Home line, solid Walnut. The sun streams through the first floor of his offices: An individual bright showroom in which dozens of swivel chair models stand around. Most of the look more like comfortable reading chairs than those plastic monstrosities you can see in the average large office. Interspersed, you see tables, wardrobes, stools, and a few artist editions that Löffler has reissued together with well-known contemporary designers: Günther Beltzig's stackable children's chairs from 1966 or his "Pegasus" from 1973, a fire-engine red seating sculpture made of plastic.

Werner Löffler takes a sip from his coffee mug. "I have basically been on vacation for the last 30 years" he says. "It was always important to me to have a job that excites me personally." Already with 14 years it was one of his favourite pastimes to search for unusual furniture on flea markets and study architecture and history of design. Instead of studying something in this direction after school, he chose to apprentice as industrial business management assistant at an office furniture manufacturer in his home town of Hersbruck. "It just made sense.", he recounts, "Even when I was six, I told my mother: I want to have a business some day!" He worked for his apprentice company for a few years as a consultant for its licensee and travelled around the world. He was a regular guest at all important furniture trade fairs and after repeatedly being confronted with the increasing number of people with back pain due to long periods of sitting, he saw this as a chance to make a name for himself in the area of healthy sitting. In 1992, he founded LÖFFLER and began to develop a unique sitting technology with the help of the Department for Ergonomics at the Technical University in Munich: "ERGO TOP".

The entrepreneur likes talking about his business. He is proud of what he has created. His furniture is exclusively produced in Germany. He is not interested in achieving so-called "maximum profit" through relentless cost savings at the expense of employees and quality just to be able to juggle his company on the financial markets. "I do not act based on the value added chain money-makes-money-makes-money. It does not take into consideration that money also destroys money. My chain is: money-makes-product-makes-money-makes product. A product is a real thing, money can lose its value from one day to the next. Heinz Erhardt once said: The capital belongs into the company!" And the company is doing well: It earns about € 12 million Euro in sales per year by selling to other businesses in Germany. At the moment there are about 15 to 18 new furniture units on the waiting list – the company founder is working on an entire Löffler world. His dream is to get to the point where people can equip their homes and businesses completely with Löffler in 5 to 8 years.

But in addition to commerce, he is still fascinated by the art. "There is this saying: If your heart is full, then so is your mouth". it was only last year that he confided his secret and publicly declared something that only his closest confidants had known: That he had been collecting seating furniture for more than 30 years, chairs, stools, armchairs, and deckchairs by designers from all over the world. All these years, he had stowed these pieces he had collected over time in many different locations. This passion had started in 1987, when he bought his first chair: "Theodora" from the Memphis movement. He knew: "At some point I would turn this into a museum." In autumn of last year the time had come. Löffler opened his collection in a 2000 square meter extension to his business offices. Even the Chief Curator of the Munich Pinakothek of the Modern was there and expressed his amazement about the art historic significance of the pieces.

However, the extension behind his offices is by no means a classical museum. To be one, it would have to be handicapped accessible, have regular opening hours, and have more space. "There are pieces that would need four to five square meters by themselves to show off their true beauty", Löffler assures us. In the long term, he dreams of an independent building for his treasures with at least 4000 sqm area. At the moment the collection is only there for pure presentation.

Visitors from all over Germany

Its great scientific quality regularly attracts design students and professors from all over Germany. This makes Löffler happy. "The interested parties can see more here than just collected chairs. They can really experience world history through the furniture, delve into another world, and understand how people used to live and think!" He would therefore never renovate his chairs. At most carefully restore and preserve them. Just this morning, Helmut Klarner, scientific consultant for the collection and independent restaurateur from Nuremberg, brought by an old Viennese Biedermeier chair. The cover was pretty worn. However, the two of them will leave it the way it is and just restore parts of it very carefully. "Just like clothes say a lot about a man, a cover tells you a lot about a time period, and this permits interesting conclusions about the entire society", Löffler explains.

His favourite example for this is a sofa by Willy Landes that he designed for Zanotta in 1965. It is called "Throw-away", is made from cheap material, and stands for everything that was new in those days: "Free love, no strings, living in the moment, erosion of values – the sofa is pure Zeitgeist!" Löffler beams and his colleague nods his head in agreement. He is a somewhat strange fellow with a wild beard and the soul of a passionate antique lover. He regularly finds new and exciting pieces for Löffler, restores them, and adds them to the collection. Löffler gives him carte blanche because Klarner has a fine sense for the originality of the chairs, knows an endless story for almost every piece, and arranges beautiful exhibitions together with the Viennese Chief Curator of the collection, Heidemarie Leitner. He looks at the chairs full of devotion and the way he touches them is almost sensual. When you stand next to him and a chair, you feel like you are standing next to two old friends whose relationship someone might try to explain to you as an outsider but which you will never fully understand. Löffler and Klarner have become fast friends. They are known to walk through the collection for hours and bask in the charisma of a single piece of furniture like two little boys playing with their first toy truck.

Just to look at it.

Sometimes Löffler even takes a chair from the collection home just to have it standing in his living room for a few days. "I don't sit on it. I just let it stand there and look at it. It is incredible how a single chair can change the character of an entire room", he rhapsodises. Löffler has already met many artists and celebrities through his activities. For the design of his company logo he flew in Professor Thomas Bley from New Zealand who, among others, is responsible for the design of the Microsoft Windows logo.

LÖFFLER and his home

Löffler networks with people from all over the world but always stays in Reichenschwand himself. "I always say: I make a lot of money in the world and live in my home!", he laughs. "Of course, you have to get out to broaden your horizons", he concedes. He himself has been all over the place. He loves travelling but would not want to live anywhere than his home. "Hersbruck is the gate to Franconian Switzerland, offers many leisure activities like rock climbing, canoeing, even skiing is not too far off in the winter. "You know, when you see that the infrastructure is good and you can realize your plans, then there is no need to go somewhere else" he says. And then he tells us the story of Peter Zumthor, the architect, who erected a small chapel in Wachendorf an der Eifel – the deepest province in North Rhine-Westphalia. You have to park your car and walk cross-country for quite a while just to get to this little 15 square meter chapel. "But when you get there you are quite overwhelmed and understand: This was worth it", so Löffler. This story is proof that it does not matter where you do something. If the product is right, the audience will come by itself. 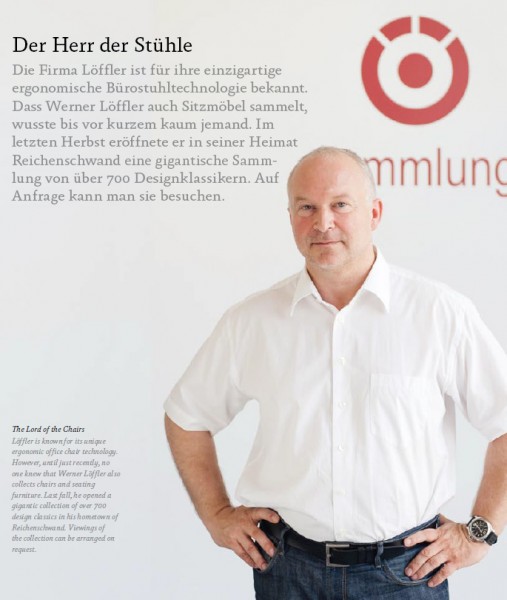